Home » Blog » He Wanted Sex In The Back Room

Tears welled up in my eyes as I watched and re-watched the same segment of Oprah’s speech from the 2018 Golden Globe Awards. Chills of connection and truth ran through my arms, legs, and core of my body as I listened. I felt hope. Her powerful words filled me with excitement and anticipation for the shifts that seemed to be nearly upon us.

“I want all the girls watching here to know that a new day is on the horizon. And when that new day finally dawns, it will be because of a lot of magnificent women, many of whom are right here in this room tonight, and some pretty phenomenal men, fighting hard to make sure that they become leaders who take us to the time when nobody ever has to say ‘me too’ again.” 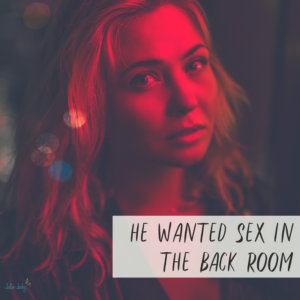 Oprah’s words sent chills through my body that loosened a memory from my mind.

I was 16, working at McDonald’s after school and on weekends.

A shift manager wanted me to arrive early to my 4 AM weekend shift so I could have sex with him in the back room before anyone else arrived. He was in his late twenties or early thirties, married with two young children. I didn’t want to have sex with him. I was afraid to say no and afraid to show up at my job that morning. But I wanted to keep my job so I came up with an idea that I hoped would be a solution.

I asked a couple of my co-workers to show up around 4 AM so I would not be alone with the manager. It felt like a big ask of my friends since no one else really liked the early morning shift, but I was hoping at least one or two people would show up anyway.

They did, and they spread the word.

First Kevin arrived. Then Patrick and Paula arrived together. Then Eric and Janine and Kyle and Tom and Lisa—they just kept showing up. They all had different stories about how they stayed up late, were at a party, or were driving by and saw cars in the parking lot.

I was amazed at how many came to save me. I felt so incredibly grateful for all my friends and relieved that I wasn’t alone with my manager. He on the other hand was disappointed that his plans were foiled. He told me we would plan another early morning.

The following week when I arrived for my next shift, Pam, the store manager, approached me. She had heard people talking about the weekend and asked me to tell her what happened. Despite being scared, I revealed the shift manager’s desire to have sex with me. I shared how so many people showed up so I wasn’t alone with him. She assured me that it would never happen again.

I am very lucky and grateful for how this situation turned out. I had so many friends supporting and protecting me, and I was able to stay with that employer until I chose to leave for another opportunity.

I know that’s not true for so many other women out there. They weren’t heard or couldn’t ask for help because they were too scared. They may have felt stuck or trapped because they needed money for their family and saying no might get them fired.

My eyes well up with tears just thinking about these women. My heart goes out to them. I know their pain. Although I escaped this situation, I didn’t escape others.

You know, I almost didn’t share this story because of the “good ending,” and I didn’t want to minimize what other people have gone through. But I decided to share to continue to raise awareness.

Sexual harassment and abuse can happen anywhere at any time to anyone. The more we speak up about it and share our stories, the more we create awareness. The more awareness we create, the closer we get to that new day on the horizon.

That new day is fast approaching.

You can learn more about my healing and forgiveness journey after childhood sexual abuse in my book  On the Other Side – A Spiritual Memoir.

Let's talk Truth. If you've tapped (aka EFT, Emotional Freedom Technique, or Tapping) with me at a live workshop, via my Youtube Channel, or … END_OF_DOCUMENT_TOKEN_TO_BE_REPLACED