Home » Blog » Your Reaction Is Your Teacher (& Your Responsibility)

While at a week-long spiritual retreat, I found myself quietly observing the interactions taking place between a man named Guy and the other retreat participants. Guy was the one person in the group who seemed like a misfit. You know what I’m talking about.

He was the one who rambled on unaware of the amount of time he was taking up. Or that his conversation was way off topic. He was the one person in the group who didn’t seem to see his own behaviors or realize how much negativity he was spewing. He was blaming other people in his life and not taking responsibility for his own actions. 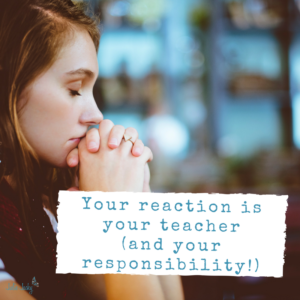 I watched as other participants one by one tried to help Guy “see the light.” They were coaching him with stories and examples, trying to get him to see his own behaviors and take personal responsibility.They really wanted to help and wanted more than anything for Guy to make a shift and have a breakthrough.

Everyone, that is, except our retreat facilitator, Ben. He was patient all week long with everyone, including Guy. Whereas others would throw up their hands in frustration at Guy’s inability to change, and then turn their backs on him to talk to others, Ben stayed patient and present. He always interacted with love, kindness, and compassion.

His ability to respond this way caught my attention. I wanted to know his secret. So on the last night of the retreat, at the final dinner where we were able to ask Ben questions, I asked him, “How did you do that? What’s the secret?”

I wanted to know. Unlike Ben, I didn’t always respond with love, kindness, and compassion in the heat of the moment.

To prove my point, I shared an embarrassing story with him:

My family was gathered at my brother’s house when a feud broke out. My mom felt attacked, looked up at my brother and said, “Can’t you see, I am the victim here.”

Without thinking I laughed at her. I couldn’t help it. It just came bursting out.

I felt bad for laughing, but at the same time it was my opinion; she wasn’t a victim. That’s just a story she was making up, and she and I had had that conversation ad nauseam—that she could take control of her life and make different decisions.

After the feud calmed down and family dispersed, I heard my oldest brother tell others that I was mean. That stung. I thought I was a good person, and I didn’t want to be mean to anyone, let alone my mom.

After finishing my story, I asked Ben, “How do I be nice to someone when they behave that way?”

He looked me in the eyes and said, “It’s your personal work to do. Your reaction is a reflection of what is going on inside of you, and you must do the work.”

I sat with these questions for several hours until it finally dawned on me:

I believed that being a victim was weak. In fact, I was doing everything I could to be strong, learn, grow, and change so I wouldn’t be a victim ever again. So when my mom played the victim, I got triggered. Instead of responding from a conscious, loving place, I reacted unconsciously, from a place of fear and judgment.

In that moment I saw clearly that my reaction was a reflection of what was going on inside of me, just as Ben had said. A part of me—a part of my shadow—had reared its head to let me know it needed healing. This was the personal work that Ben was talking about.

We all have our own triggers. We all have parts of ourselves that need healing. When you find yourself reacting strongly to something or someone, pause. Notice what’s going on inside. Then commit to doing the personal work needed to integrate the part of yourself that has come to your attention.

The more we do the work, the more loving, kind, and compassionate we can be with ourselves and each other, no matter our differences.

Do you want to help doing your personal work?  You do need to “tap on the crap”.

In fact, join me and I will guide you to tap on your crap! (It’s easier that way.)

Let's talk Truth. If you've tapped (aka EFT, Emotional Freedom Technique, or Tapping) with me at a live workshop, via my Youtube Channel, or … END_OF_DOCUMENT_TOKEN_TO_BE_REPLACED