Home » Blog » How Do You Forgive the Unforgivable? (Part 1)

The first time I heard the words “forgive” and “abuser” used in the same sentence by my coach, I recoiled in disgust. I thought, “No fucking way! No fucking way am I going to forgive the person who abused me. What he did was WRONG. How could I forgive him for what he did?! I don’t want to forgive him!”

She interrupted the rant in my head by suggesting that I not only forgive him but that I also find the gift in the abuse. I broke my silence. “Gift? What the hell kind of gift will I ever find in the abuse? There isn’t a gift in that.” 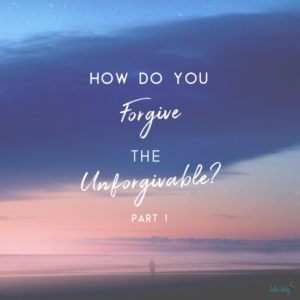 “Julie,” she said gently, “hurt people hurt people. When people are hurt, they lash out and hurt other people—sometimes consciously but other times they have no idea they are even doing it. Since he was hurting you, it’s likely someone was hurting him, because what he did to you is not normal behavior. What he did to you comes from a hurt person.”

Until that moment, I’d never considered that he could have been abused or hurt by someone and therefore abused me. I finally understood the phrase hurt people hurt people. However, my new understanding didn’t ease any of my pain or make me want to forgive him.

Probably sensing my inner reaction, my coach decided to put a cherry on top of this already uncomfortable conversation.

“You may have heard this before, but not forgiving someone is like drinking poison and expecting the other person to die,” she said. Before we hung up the phone that day, my coach gave me a challenging assignment: write a letter to my abuser and find compassion for him. I didn’t have to mail it or give it to him. I just needed to write it.

I was paying her to coach me and push me out of my comfort zone, but I really didn’t want to do this assignment—the thought of it triggered intense resistance within me. Aware of my reaction and feelings, I reminded myself of a mantra I’d heard Tony Robbins belt out in his deep commanding voice at one of his seminars: If you can’t, you MUST.

Clearly, this was something I needed to do. So I begrudgingly started writing.

Even though I knew I wouldn’t actually send the letter, it wasn’t easy to write to someone I hadn’t talked to (nor wanted to talk to) in years. It felt awkward and uncomfortable trying to figure out what I wanted to express. I didn’t know how to start the letter, but eventually, the words began to flow. When I got stuck again I referred back to my notes in my coaching journal and almost word for word copied the example she provided to me on the call. I did what my coach guided me to do, but frankly, I just wanted to get it over and done with and slam the door shut on that part of my life.

Even at that time, I knew I wasn’t leaning in and truly feeling the pain of the abuse he inflicted upon me because I didn’t know how to. The letter felt contrived and inarticulate because that’s exactly where I was in that moment on my healing journey. I was just going through the motions doing what I thought I was supposed to do, which in hindsight makes so much sense.

I had cut my feelings off so long ago when I was being abused, I had just been going through the motions, doing what I thought I was supposed to do in all areas of my life: my marriage, my job, my family, and my home. And I didn’t actually forgive him when I wrote that letter. It was more of a faux forgiveness letter. I wanted to forgive because it’s the right thing to do, but I put the least amount of effort into it as possible.

Flimsy—that’s what this letter felt like to me because I wasn’t ready to forgive him. After I finished the letter, it felt way too personal to share with my coach, not to mention I half-assed the assignment and didn’t want her to make me write the letter over again. I sent an email to let her know I did my homework. She never brought it up again, nor did I. I was off the hook—because I took the easy way out and let myself off the hook.

But my healing from sexual abuse was far from over. In fact, it had only just begun.

Continue to How Do You Forgive the Unforgivable? (Part 2)

Let's talk Truth. If you've tapped (aka EFT, Emotional Freedom Technique, or Tapping) with me at a live workshop, via my Youtube Channel, or … END_OF_DOCUMENT_TOKEN_TO_BE_REPLACED