Home » Blog » How Do You Forgive the Unforgivable? (Part 2)

As we gathered at the workshop, we sat in a circle. The group was a mix of 13 women and 1 man who had all come together with the common desire to forgive someone. The workshop facilitator, Mary, introduced herself to us and shared the weekend’s agenda. First up, we were to introduce ourselves and share our story of who we wanted to forgive and why. Then, we’d start learning the first few steps of the 8-step forgiveness process.

As participants briefly shared their stories it became evident that everyone was in a different place on their journey. 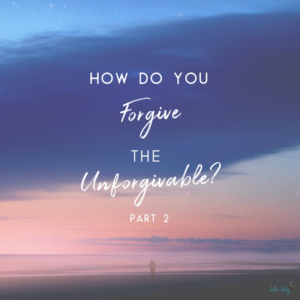 A couple of others, like me, had come to forgive their abusers, including one brave young lady who had been raped just a few weeks prior. She was attending the workshop to forgive her rapist at the encouragement of her grandmother.

I shared with the group that I had gone through a lot of therapy to heal from childhood sexual abuse and had learned how it had impacted my whole life. I told them I had held onto the pain of the abuse long enough and that it was time to take my power back. I told them I was there to forgive the person who had abused me.

After our sharing was over, Mary explained to us that the old model for forgiveness was “forgive and forget” while the new model of forgiveness is something that heals. She told us that when we got through all 8 steps of the forgiveness process, we would feel peace inside ourselves. But first, we had to decide to do it. We had to commit.

She also explained that when we forgive someone we aren’t condoning their behavior, taking responsibility for their actions, nor letting them off the hook. When we forgive, we are actually freeing ourselves.

When we forgive, we are dissolving all the blocks of pain and stress that we’ve carried. The dissolving occurs through an experience that happens inside of ourselves, not between us and another person. I came to understand I was actually freeing myself from forever carrying the block of pain and anger, and I was letting go of any expectations of how things should have been.

I saw clearly that forgiveness didn’t really have much to do with my abuser. It was about unburdening and freeing myself. We had just barely eased into the forgiveness process, yet the healing had already begun.

As we closed out the session, Mary told us tomorrow would be a big day and gave us a hint that she would ask for a volunteer to demonstrate with her. Although I imagined it would be tough to go through the process, I wanted to volunteer.

I knew with Mary leading me, I would dig a lot deeper and do the work if I was doing it 1:1 with her. If I did it on my own, during the large group exercise, I might let myself off the hook again. I didn’t want to do that this time, so I promised myself I would dig deep and play full out no matter what.

At that moment, I had a knowing inside of myself that she would select me. What I didn’t know was how saying yes to this experience would alter my life forever.

Continue to How Do You Forgive the Unforgivable? (Part 3)

Let's talk Truth. If you've tapped (aka EFT, Emotional Freedom Technique, or Tapping) with me at a live workshop, via my Youtube Channel, or … END_OF_DOCUMENT_TOKEN_TO_BE_REPLACED