Home » Blog » How Do You Forgive the Unforgivable? (Part 4)

I thought I had dealt with all of the anger, but I quickly learned my body was dutiful and kept everything buried like I had commanded it to all those years. With my lips pursed in anger, I told Mary, “I want to kick him in the balls and hurt him after all he did to me. It impacted my whole life! And I am angry!” 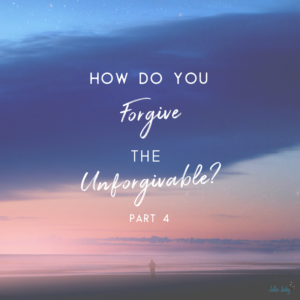 Mary grabbed a pillow off the chair, held it up against her body, and guided me. “Pretend I’m the abuser, knee the pillow and get all the emotions out of your body. They are buried deep within you and you want to get them all out.”

The first couple of knees to the pillow were rather wimpy because I felt utterly stupid kneeing an offending pillow with people watching.

I was also afraid I would knock Mary over. She encouraged me to let loose, assured me this wasn’t her first angry pillow experience and said she could handle more. I reminded myself to play full out despite feeling stupid with all eyes on me.

In my mind, I pretended she was the abuser and he had to stand there and take it. This time I mustered up the courage to knee the pillow with a lot more strength and intensity. Wham! That felt good! Plus, I was happy I didn’t knock Mary over and was impressed by how strong she was. Mary cheered me on for being brave. I straightened back up, put my hands on the front of her shoulders, and then kneed him and kneed him some more. Wham! Wham!

As I kneed him I yelled and I cried for all the ways he had hurt me.

I cried because I was embarrassed I was saying these things out loud to strangers. I cried for the younger Julie who went through all of the abuse. I cried because I had been hurt. Then I broke down and sobbed for the younger Julie who was sexually promiscuous with more guys than I wanted to admit to myself let alone to anyone else. Mary cheered me on for letting out all that had been hurting me. She cheered me on for digging deep, and I could feel her support and compassion for me.

I continued to sob for the younger Julie who had had an abortion just after turning 16. I knew it was because of the abuse, but I couldn’t muster the strength to say that one out loud to the group between sobs and the lump in my throat as well as the shame I was feeling. I had shared as much as I could out loud. It was vulnerable and difficult to do.

I kneed him until I couldn’t knee him anymore. All of a sudden I just stopped. Not because I was tired or out of breath. Not because I didn’t have the strength to keep kneeing. I literally just couldn’t do it anymore. It was like a switch shut off the desire to hurt him. I no longer wanted to hurt him because he was a human being, and I didn’t want to hurt another human being no matter who they were or what they had done. I wasn’t a violent person nor did I want to be.

Mary asked me to dig even deeper and keep going.

Mary shared with me and the group that it’s ok to feel that way because what he did was shitty no matter what, and forgiveness isn’t about condoning another person’s behavior. It’s about getting it all out of our bodies and letting it go for ourselves.

Although I didn’t enjoy opening up, being raw, and saying all the things in front of an audience, I knew I would feel different once I got through to the other side of the process. I looked up at the others watching me and quickly looked back down at the empty chair. Though they were so supportive of me, holding space for me and encouraging me, I couldn’t look at them. I was embarrassed. It was hard enough admitting that shit out loud to myself, let alone to them and a figment of him in a chair.

Continue to How Do You Forgive the Unforgivable? (Part 5)

Let's talk Truth. If you've tapped (aka EFT, Emotional Freedom Technique, or Tapping) with me at a live workshop, via my Youtube Channel, or … END_OF_DOCUMENT_TOKEN_TO_BE_REPLACED