As I walked towards the back of the ballroom of the historic Hotel 340 in downtown St. Paul, Minnesota, I noticed Dara sitting by herself with her hand perched against her forehead and eyes looking down at the white cloth on the large round dining table. She looked to me like she might be feeling sick so I stopped and asked her if she was okay. She told me she was nervous because she was speaking next, on stage at a conference for small business owners that we were both attending. 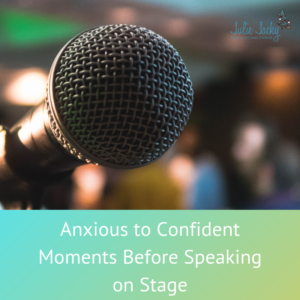 I asked her if I could help her. She looked up at me with a gleam of hope in her eye, nodded her head up and down, and got up out of her seat to follow me into a quieter space where we could tap without interrupting others listening to the current speaker. In the small adjoining room, we sat down in a couple of chairs that were out of the main walking path so we could have a little more privacy.

I asked Dara to share with me the thoughts that were going through her head and she articulated some of the common thoughts and feelings many of us have had before standing up to speak in front of the group, no matter the size.

Common thoughts I have heard people express before speaking include:

I guided Dara through the tapping points and asked her to follow along with me and trust the process.

I led, speaking out loud repeating what she had shared with me, and she echoed me while we each tapped the points on our own bodies. After tapping for just a few minutes her body calmed down inside and she said she was actually excited to take the stage. She realized she wouldn’t forget anything or mess up because she knew the content inside and out. After all, she was passionate and experienced at guiding authors through the process of publishing their books and she would do just fine. She shifted from fear to confidence right before my eyes.

I took my seat between two of my friends who both happened to be named Amy and we listened to Dara share her wisdom and offer tips to a large room full of potential authors. As she was speaking the Amy on my right side leaned over and whispered she’d heard Dara speak several times before and this was by far her best. She was so impressed that when Dara was done speaking she made a beeline over to her table to let her know how awesome she was.

Here’s the story in Dara’s words:

Before giving a presentation, I was officially allowing nerves to get the best of me–sweaty palms, anxiety, and serious panic. After sitting with Julie for only a few minutes before my presentation, I felt immediate relief. After working with her, I was not only no longer anxious, but excited to take the stage. Never before was I completely relaxed giving a talk in front of a large crowd. After my presentation, several in the audience told me that my presentation was their favorite. One woman said, “I’ve seen you speak before and this was your best.” I have Julie to thank. ~Dara B. Co-founder of Wise Ink

Listen, you don’t have to feel nervous before you go on stage. You can tap and turn that fear into confidence and excitement. You just need to state your fears out loud while tapping and allow the fear in your body to dissipate.

Be sure to join me in my free Facebook Tapping Community for tap-a-long videos to help you clear out your fear and anxiety of public speaking.

Let's talk Truth. If you've tapped (aka EFT, Emotional Freedom Technique, or Tapping) with me at a live workshop, via my Youtube Channel, or … END_OF_DOCUMENT_TOKEN_TO_BE_REPLACED